KAJILLIONAIRE tells the story of Old Dolio Dyne (Evan Rachel Wood) a 26-year-old woman who lives in Los Angeles with her parents Theresa (Debra Winger) and Robert (Richard Jenkins). No one in this family is studying or working or involved in any of the pursuits one might expect of a married couple in their 60s and their adult daughter. They are “skimmers” which means they make the bare minimum of money they can, out of petty crimes. The idea is to make what they need to live and stay off the radar of law and the government. Robert is openly contemptuous of the American Dream declaring that it is all about greed. He says everyone wants to make big money and become a “kajillionaire”.

The Dynes are an impoverished, tightly-knit crew who are distanced from everyday life and common people. They keep themselves to themselves, except when they are breaking the law. They believe the world is trying to scam them, but with their own tiny, half-baked scams, they are the true winners, at least according to the philosophy of Robert and Theresa. Their relationship leaves no room for anyone else, not even Old Dolio who seems more like a subordinate than a family member in this idiosyncratic, wonky enterprise.

The Dynes are in the middle of a scam that takes them to New York City when they make a connection with Melanie (Gina Rodriguez), a young woman similar in age to Old Dolio. The older Dynes, usually so separate from all other people, take to Melanie, much to Old Dolio’s confusion. And when Melanie discovers that she has fallen in with a family of scam artists, she stays to learn about their life, rather than reporting these people.  This doesn’t suit Old Dolio, at all. Her understanding of her role in the family business is shaken by the presence of this friendly newcomer.

KAJILLIONAIRE is an off-beat, individualistic piece of filmmaking that will puzzle anyone new to the work of writer-director (and many other artistic hypens) Miranda July. It certainly isn’t for everyone. The storytelling is oblique and sometimes vague. There are many scenes where we are given hints and clues of possible larger things, but have to work out how to put together this puzzle, how to connect these dots. It’s a crime story in its structure, but July has explained that the research she did for this was her experience watching 1960s episodes of MISSION IMPOSSIBLE.  She was nine-years-old at the time.

The plot is a comedic take on a tiny family that has convinced itself with cult-like devotion, that they are wise and everyone else is a fool. They feel themselves ennobled by their separation from the BS concerns of you and me.

However, Melanie is the outsider whose presence unbalances the Dynes. She is part of the more serious emotional part of the story that makes us consider what a family is and more specifically who Old Dolio is. Evan Rachel Wood’s portrayal of this woman is unlike anything she has done before, because Old Dolio is utterly unusual. She is emotionally and mentally wrapped up and tied down. She understands almost nothing about how anything works outside of the scams. She doesn’t have any clarity about how other people work or how she exists. Watching her slowly travel through the world and attempt to change things for herself, is an exhilarating journey. Gina Rodriguez takes the role of Melanie and invests it with an energy that lights up the strange universe we are lured into. Old Dolio and Melanie are the film.

This is the first of Miranda July’s features that she herself does not appear in. If you have seen her previous films, then you will be well-prepared for this one and its ability to veer anywhere. For the rest of us, who are looking for a film that is not obvious and formulaic, this is a deadpan comedy about a woman searching for the courage to go beyond the certainties she has lived with her entire life.
Duration – 106 minutes. (7.5) 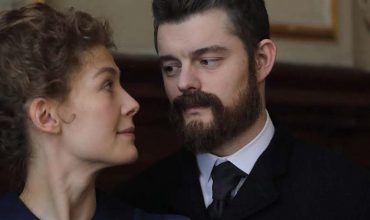