Eddee Mathis is a woman who has lost everything. She’s played by veteran actress and first time film director, Robin Wright. We have no idea what terrible thing has happened to her. But it was bad enough that she’s leaving her entire life behind.

Eddee’s bought a lonely cabin in the mountains of Wyoming. Honestly, ‘cabin’ is a strong word. It’s falling apart and the wind whistles right through it. There’s no real shelter there. But she’s driven out there with a pile of supplies, and a few ‘how-to’ books. And then she’s paid someone to drive her car back to town. She’s entirely, terribly alone.

An old man warns her, ‘It’s not a good idea to be out here without a vehicle.’

Obviously she won’t be fine.

Even now, I can’t decide whether she underestimates the danger, or just doesn’t care.

But it makes sense. She’s hurting as badly as anyone can hurt. And she’s moved out here to make her physical outsides match her emotional insides. Just like her, this land is cold, isolated, and full of unseen dangers.

Things get deadly pretty quickly. And it’s only through complete luck – and the stubborn care of a hunter named Miguel – that the story doesn’t end then and there.

Miguel (played by Demián Bichir) has a sad story of his own. He teaches Eddee how to live in this wilderness. How to hunt, to trap, to fish. How to prepare the meat.

Don’t worry: it’s all kept very vague. No knife close ups, no blood. Miguel and Eddee kill to feed themselves, but they take no pleasure in it. They also build vegetable gardens, read books, take baths, sing Tears for Fears together:

LAND is a very restrained film. Screenwriters Jesse Chatham and Erin Dignam keep the dialogue pretty sparse. There’s a beautiful awkwardness to most of the spoken lines. It’s nothing you can put your finger on, but it’s almost stressful to listen to. Like Eddee says, it’s hard to be around people.

With so few words, we can really focus on the physical performances. Demián Bichir’s Miguel is excellent, and the chemistry he has with Eddee is just amazing. Robin Wright is absolutely phenomenal. She’s always done well with restrained characters. Women who do not show much emotion, but keep their pain just below the surface.

We find out what happened to Eddee very slowly. But not because LAND is trying to drag the film out. It’s more that Eddee is unable to even view those memories yet. When she is strong enough to do so, we see them too.

The final strength in this film is the landscape. The Wyoming mountains are glorious, and it’s a joy to see them change with the seasons.

The mountains are isolated, beautiful, and dangerous. And for Eddee, they are the perfect place to learn to live again. 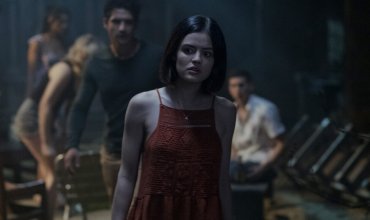