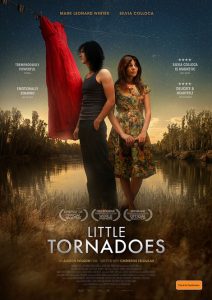 A newly-single father struggles to weather the turbulence of change, while a new immigrant endeavours to find her place in a foreign land.

Set in 1971 in rural Australia, introverted Leo is a metalworker at his small town’s local plant. After his wife vanishes, leaving him to care for their two young children, he is bereft – barely able to cook a decent meal or keep the household running. So when a recently-arrived Italian colleague suggests that his sister, Maria, act as a surrogate homemaker, Leo reluctantly accepts. But can one woman’s warm, nurturing presence fill the void left by another, and can Leo yield to the winds of change?

The film details the many upheavals of 1970s Australia – from immigration and post-war resettlement to urbanisation, anti–Vietnam War protests and the women’s liberation movement – into a narrative about one man’s struggle to adapt. Little Tornadoes is a portrait of a country at a turning point and the human desire for connection.