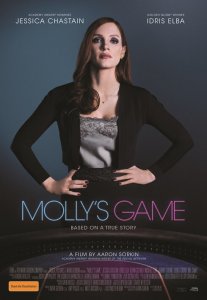 The true story of an Olympic-class skier who ran the world’s most exclusive high-stakes poker game and became an FBI target. Her players included movie stars, business titans and unbeknownst to her, the Russian mob. Based on the best-selling memoir, MOLLY’S GAME is the directorial debut of Academy Award winning screenwriter, Aaron Sorkin.