Twenty-five years ago, the small town of Woodsboro, California, became infamous for a series of teen murders. The culprits were also teens, Billy Loomis (Skeet Ulrich) and Stu Macher. Billy was the disturbed leader, but although he killed for what he thought were justifiable personal reasons, he saw his actions as though he were the villain in a slasher movie. His obsession with the genre dictated his crimes and how he chose his victims. Her even taunted his targets over the telephone and turned stalking his prey into an even sicker game. These murders became national news, in no small part because of reporter Gale Weathers (Courtney Cox). Later she wrote the story in a best-selling book called Stab, which itself became the basis for a popular slasher-movie franchise.

Since then, there has been three major times when other knife-wielding killers have dressed as Billy Loomis did, in a spooky Halloween mask, black hood and flowing robe. This trademark disguise is known as Ghostface. In Woodsboro, this identity strikes fear into people who know that if Ghostface returns, there will be multiple killings, mostly, but not exclusively, of the unlucky teens who live in the town.

Now, Ghostface is back and is one again contacting victims over the telephone, but also seems to have greater technical savvy appropriate to our digital age. He can manipulate security systems and even door-locks. The first person Ghostface calls is high-school student Tara Carpenter (Jenny Ortega). She is at home alone and doesn’t know who she is talking to.  When she does, she realises that she and her friend Amber (Mikey Madison), with whom she has been texting, are both in grave danger.

And so, begins the new SCREAM adventure and although it’s the fifth Scream movie, it has the same name as the first Scream movie. And because this is the Scream movie franchise they give us a scene to tell us want they’re doing and why. Scream (2022) brings out the term requel, which has been around a while but isn’t commonly used outside of film-head circles. It explains a requel as a part-sequel to a franchise and part-reboot in which new characters and their stories are set-up, while eventually calling upon the established legacy characters. The overall idea being to build a new audience on a foundation of existing fandom.

Yep, Scream is as meta as ever. It introduces the new characters, who are chiefly Tara Carpenter and her older sister Sam Carpenter (Melissa Barrera). Sam comes back to Woodsboro to check on her sister. The two have been estranged for several years. She travels with her devoted boyfriend Richie (Jack Quaid). She finds it surreal to be back in her old hometown and isn’t exactly welcomed by her sister’s friend-group. They know her because she used to baby-sit most of them, but they don’t trust her because of what they have heard about her from Tara and taken her side. Tara feels she was abandoned. Sam wants to repair her relationship and keep her sister safe from the new, deadly Ghostface, whoever he or she may be.

The whodunnit portion of the film is Sam looking to work out that identity. We follow her step-by-step as she questions suspects and enlists allies in her journey. And although she is the main character, this doesn’t make her invulnerable. Long-time fans are also clear that at some point, her path must cross with those of Dewey Riley (David Arquette), Sidney Prescott (Neve Campbell) and Gale Weathers.

SCREAM (1996) was the film-literate slasher movie written by newbie Kevin Williamson and directed by horror veteran Wes Craven. It established Williamson’s reputation, the movie broke box-office records and it redefined the concept of movie horror from then on. The characters in these films don’t know they’re characters, but they are expert in the rules of horror movies and when the pressure is on, might use them as a method to stay safe.

SCREAM (2022) redefines some rules. It’s less concerned with characters not having sex, for example (formerly this was a certain way to be targeted by Ghostface) and it brings forth some new ones that suit the current situation. The thing is, if you’ve seen a Scream film, you know most of what is going to happen here. However, this edition is not written by Williamson (as Scream 2 and 4 were) and Craven, who directed all the previous films, died in 2015.

On this go-round, it was decided that Matt Bettinelli-Olpin and Tyler Gillett would direct. Writer Guy Busick, who worked with the pair on the excellent READY OR NOT (2019) was also part of the new team, as was writer James Vanderbilt (WHITE HOUSE DOWN). They have put together a smart take on what was always a clever franchise. Occasionally, the self-referential humour is over-done, but the suspense and the fights are well-handled. The jump-scares are not particularly scary, but there is a body-count and an expected amount of gore.

The new cast do well take up the torch of the main characters (yep) and it is a pleasure to see Dewey, Gale and Sidney again. I was happy to see them in their secondary roles, although some fans may have wanted more. All up, the dramatic balance between old and new is well done, the comedy is effective and the speed of action and thrills is entertaining. Having recently seen the requel-ish MATRIX 4, I am very happy that the new Scream Team (with Williamson as Executive Producer) have made their reboot/sequel work as effectively as they have. Go see this one. 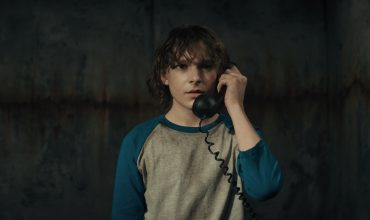