1947. Lord and Lady Mountbatten arrive in Delhi. He is the last Viceroy of India and he is charged with the task of overseeing the transition of British India into an independent nation. While Lord Mountbatten speaks with Indian leaders, sectarian violence between Sikhs, Hindus and Muslims increases. This violence pushes the British towards Partition, the creation of the Dominion of India (Hindu) and the Dominion of Pakistan (Muslim). Many support Partition and many do not. As the deadline to Independence approaches, the hastily announced Partition causes a mass migration of Muslims and Hindus across what will be the borders of the new nations. 14 million people leave their homes. A million perish.

Director Gurinder Chadha is known for her feature films BHAJI ON THE BEACH (1993), BEND IT LIKE BECKHAM (2002) and BRIDE AND PREJUDICE (2004). VICEROY’S HOUSE is a costume drama set in the final days of the British Raj. It takes what Chadha describes as an Upstairs Downstairs view of the Partition of India.

This point-of-view puts the audience squarely amongst the Brits. The Mountbattens, the last Viceroy and Vicerene or Dickie and Edwina to their friends are shown to be thoroughly decent people attempting an impossible task. There are plentiful scenes of Lord Mountbatten speaking with Gandhi, Nehru, Jinna and other Indian leaders. The dialogue is therefore heavy with politics and plot exposition. An alternative focus is the complicated relationship between two of the servants, translator Aalia (Huma Qureshi) and valet Jeet (Manish Dayal). Aalia is Muslim and Jeet is Hindu. Her marriage has already been arranged and only her prospective husband’s army service is preventing the wedding. There seems little prospect that Jeet will ever marry Aalia given these obstacles.

This blend of political horse-trading and star-crossed romance makes for awkward story-telling. Jeet and Aalia’s turbulent, largely symbolic cross-cultural struggle feels tacked on. However, without it, the balance of the story is Partition through the eyes of the people it had the least effect on, the vacating Brits. Whatever their feelings about leaving India, their families weren’t forced from their homes nor subject to violence and murder. Chadha has always used her Indian heritage (she was born in Kenya and part of the Indian diaspora in East Africa) to tell stories where cultures collide. She does this with something of an outsider’s eye and this vantage point has been fruitful. However, the scale and tragedy of Partition was so vast that it would seem to dwarf the story of those who had a hand in its creation.

The Mountbattens were a fascinating couple whose lives spanned truly turbulent times. Gillian Anderson goes all out with her cut-glass accent and imitation of Edwina’s stance and walk (surprisingly Anderson says she had plenty of video to help her with this). However, somehow the open secret of her affair with Nehru goes missing from the story. The director was keen to offend no one it seems, but this omission is a gaping hole in the Mountbatten story. The casting of Bonneville is a similarly safe decision. He brings us no less than Downton Abbey’s Lord Grantham in dress uniform. The understanding aristo, the affable Lord has been cut and pasted into the role of the charming Dickie Mountbatten, just the chap to persuade the Indians to stop bickering and get on with things.

For those who want a prestige drama beautifully photographed in gorgeous locations with stunning costumes; there is much to delight the eye. Some scenes were shot in Rashtrapati Bhavan, the actual Viceroy’s House, but most were filmed at the Umaid Bhawan Palace, residence of the Maharaja of Jodphur. For those who are sketchy on this piece of Indian history, the film can serve as a useful primer. The performances are solid and the rest of the cast includes veterans like Michael Gambon, Simon Callow and the late Om Puri.

VICEROY’S HOUSE is a light treatment of a heavy subject. It will entertain those who enjoy a glossy historical drama. Running time 106 minutes. (6/10) 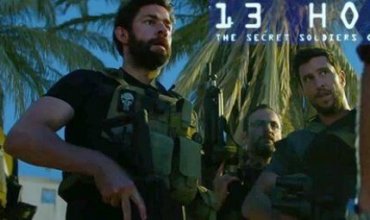 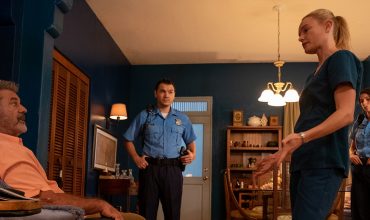