After dying in a tragic accident, a man returns to his house as a ghost in a white sheet and attempts to reconnect with his bereft wife. A Ghost Story, written and directed by David Lowery, and starring Casey Affleck and Rooney Mara, explores life after death, legacy and loss. The film is a beguiling meditation on the enormity of time and the universe, and our place within it. 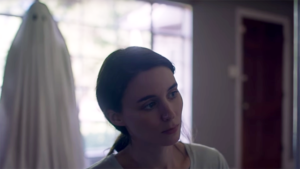 The film’s immense subject matter is astonishingly ambitious given the lack of plot or action. It leaves you with nothing tangible, but a sense of your own insignificance within the grand scheme of the world. It plays with audiences’ expectations of what a film can be, and is drenched in symbolism and some trippy cinematography, with a few jump scares just to wake you up, after watching Rooney Mara eat a pie for five solid minutes.

For artistically understandable reasons, the film’s pace is incredibly slow at some points, when it dives into the genre of hard-core realism in scenes of people doing tedious, every-day things. These lengthy scenes may be boring for many viewers, and it is an effort to stay with the film, but one which is rewarding if you’ve got the stamina for it.

The visuals are hauntingly beautiful, every scene framed and filtered like a polaroid. The great score compounds the emotional resonance of the film, and the main song will be stuck in your head hours after the credits roll. 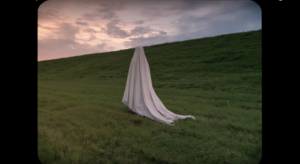 All in all, A Ghost Story is ominous, thought-provoking, and a harmonious marriage of philosophy and art, but don’t expect to be entertained. Watching this film versus watching a mainstream blockbuster is a comparison similar to reading Ulysses versus reading The Hunger Games. Like poetry, this film condenses an indescribable human curiosity into a singular and original form. It is not for the average cinema-goer, but can be a deeply intense experience for those with the patience and stamina for 90 minutes of Casey Affleck watching people from beneath a sheet.

A Ghost Story is in cinemas from July 27th. 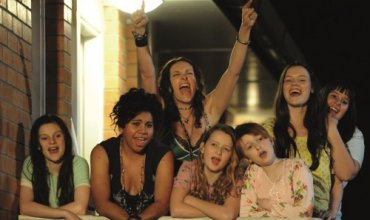 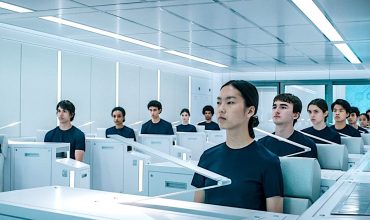