Atomic Blonde is only few days away from hitting our cinemas. So is it as good as the trailer leads us to believe?

Lorraine Broughton (Charlize Theron) is an elite spy in MI6 who has been sent on a mission to recover priceless information and find the identity of a spy who killed one of her own. In Germany, she reluctantly teams up with David Percival (James McAvoy) after he claims he has information which could help her. Along the way, she also attempts to assist a Stasi defector but in the process discovers multiple layers of deceit, a double agent, and a deadly espionage ring ready to kill her.

Atomic Blonde is based on Antony Johnston and Sam Hart’s 2012 graphic novel The Coldest City. The story is very fast paced, has more intricacies than your average spy movie, and does jump from one location to another, however, as long as you pay close attention at all times you should be able to follow the story. 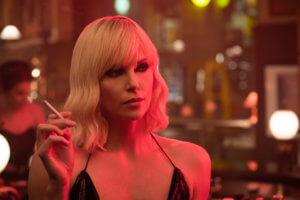 Surprisingly, majority of the film is aesthetically pleasing with all the great ’80s style neon background and the right amount of sophisticated eighties style without the costume designers going ghastly retro. The thought of Theron and McAvoy wearing normal eighties fashion while killing people would have been a sight to see though.

The action scenes involving Charlize Theron are equally powerful and brutal as David Leitch’s previous directorial work on John Wick. Each fight sequences play out unapologetically vicious and convincing, in fact, there are times where it looks like one continuous shot of Lorraine eliminating her enemies. That smooth editing and constant hand-to-hand combat should leave all action fans impressed. Complementing the style of the film is Tyler Bates’ catchy soundtrack – carefully designed to add extra excitement at each pivotal and thrilling moments as the story moves forward. 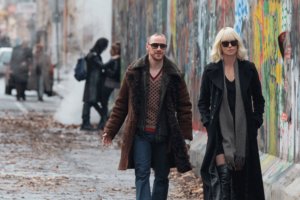 There are weaknesses in the plot as Lorraine dwells deeper into espionage double crossing and the lies surrounding it. There are times where the creators seem to have forgotten to tie up some loose ends as the many layers unfold during movie. However, one could say the quality of the performances, soundtrack, and cinematography makes up for an imperfect storyline.

The portrayal of forced communism in Europe is not too heavily shown on screen but the depiction is uncomfortably all too realistic. Having mostly Hungarian and German crew most definitely helped bring authenticity to that aspect of Atomic Blonde.

Charlize Theron has proven herself to be a skillful action star in the past and she is certainly electrifying as Lorraine. Joining her is James McAvoy, who adds the right amount of audaciousness to balance out the seriousness of Lorraine and her mission.

Overall, if you love a bit of mystery and action then Atomic Blonde is the one for you.

Atomic Blonde will be in cinemas this Thursday. 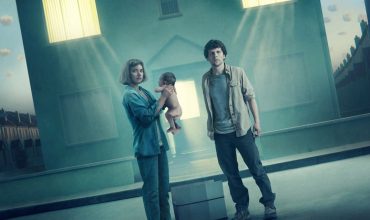 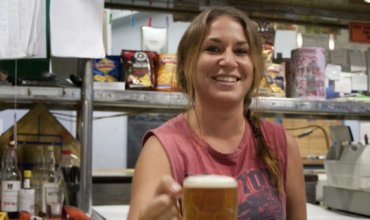