Amy (Kaitlyn Dever) and Molly (Beanie Feldstein) are about to graduate high school. The long-time best friends spent four years studying hard and have been offered places in top colleges.  They studied so hard, in fact, that they never socialised with their peers, whom they consider to be immature time-wasters who will never amount to anything. Their view about themselves and their fellow students is, unsurprisingly, flawed. After all, what 17-year old has an accurate picture of themselves in the world? An incident occurs which causes the pair to re-assess their place in the high school universe. As a result, they intend to exit their school years on a high by cramming into one night, the four-years of partying they missed.

Their mission requires getting themselves to the hottest party of the evening. But their journey there is complicated by not knowing where any of their classmates live and what the most desirable of the graduation parties might be. Four years of voluntary isolation has left them poorly equipped to know where to go, how to get there and what to do when they arrive.  Molly’s determination and the duo’s combined (book)smarts lead them on a ping-pong journey around the city, where they discover surprising facts about themselves and the people they spent four years with; people it turns out, that they barely know. It’s a night for dropping masks and shedding identities.

BOOKSMART is a fresh take on the American coming-of-age comedy. Its DNA can be found in a myriad of high-school flicks/teen movies made since the 1990s, such as DAZED AND CONFUSED (1993), CLUELESS (1995), MEAN GIRLS (2004), SUPERBAD (2007) and LADYBIRD (2017). However, the strength of its writing, direction and performances mean it’s a top-notch entry into the genre. The screenplay was written by Emily Halpern (Trophy Wife), Sarah Haskins (Black-ish), Susana Fogel (THE SPY WHO DUMPED ME) and Katie Silberman (ISN’T IT ROMANTIC?) and the result is inventive, clever, insightful and flat-out funny. Like 2018’s BLOCKERS, it pushes the teen comedy further towards saying something, without sacrificing the laughs.

Actor Olivia Wilde handles her directorial debut with great skill. She is on record as saying her fifteen years spent in front of a camera, watching directors like Spike Jonze and Martin Scorsese work, was her film school. The performances from her young cast are impressive. The film’s two leads are excellent and there is a range of seasoned players such as Lisa Kudrow, Jessica Williams, Mike O’Brien, Will Forte and Jason Sudeikis who keep their scenes ticking over nicely. Billie Lourd does a terrific comedic turn as Gigi the school’s crazed socialite and Social Media influencer.

From the opening scene, Dever and Feldstein grab your attention by portraying a close friendship with all the rituals and in-jokes that signal they are two against the world; this is their great strength and now it’s their challenge. Watching Amy and Molly take their next step forward is a hilarious joy. 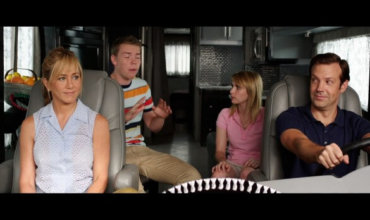