Between 26 May and 4 June, 1940 some 400 000 allied troops (Canadian, French, Belgian and British) were surrounded by German forces in the harbour town of Dunkirk in France. The allies had been routed and effectively pushed into the sea. Trapped in a tiny area of land without supplies, nor reliable transport, the troops waited for large Royal Navy ships to get them to safety. In the end, hundreds of small craft, fishing vessels and recreational boats, came to their rescue. Dunkirk was a military failure, but the rescue became known as the Miracle of Dunkirk and it soon turned into a rallying point for the public and a key piece of national propaganda; it remains an iconic story that celebrates British courage and resourcefulness in the face of seemingly insurmountable odds. In Australian terms, the story has parallels with the evacuation of the ANZACS from Gallipoli. In both cases, the life-saving withdrawal of men from a defeat became almost as celebrated as a victory.

Winston Churchill’s famous “We will fight on the beaches” speech acknowledged the miracle. Director Christopher Nolan attempts to mirror the speech by dividing the story into a triptych of land, sea and air. These three divisions are also time periods, the land story (on the beach and The Mole) is one week, the sea story (on a boat crossing the channel) is one day and the air story (on a spitfire headed towards Dunkirk) is one hour. Nolan loves playing games with time as he showed in MEMENTO (2000) and INTERSTELLAR (2014). In DUNKIRK there are moments where even an alert viewer has to reconsider the timeline, but for the most part the audience is taken for a tense ride that never lags.

There is no main character to focus on. There are characters with whom the audience will identify as the seconds tick by and the peril grows, yet we never find out who they actually are. Names aren’t important, but based on screen time, we follow the symbolically named Tommy (Fionn Whitehead) on the longest journey. As he moves from one event to the next, you will find yourself willing him on, knowing that he could die in any number of ways because you see what happens to his friends.

This look at the minutiae of survival is the brilliant centre of the film. The production design and wardrobe are first class and many of the military vehicles are full-sized originals or replicas. There isn’t that familiar let-down of witnessing slightly dodgy CG. Instead you marvel at the excellence of the detail and before you know it, you are fully immersed in the story. Suspension of disbelief is easy. As a friend said in the wrap-up afterwards, although DUNKIRK owes a debt to THE THIN RED LINE (1998) and SAVING PRIVATE RYAN (1998), it isn’t trying to terrify with that kind of bloody violence. Like David Ayers’ FURY there is a you-are-there immediacy to the way the sequences are shot. We are in the cockpit with the pilot, under the water with men swimming to safety; the camera is right in the middle of the action capturing expressions, gestures and emotions. We, the audience, are in all this mess and danger, too. However, we don’t know any back story at a personal level or any history at a geo-political level. The film chronicles these Tommies and their fight to stay alive. DUNKIRK is undoubtedly a war movie, but it’s not about the reasons and the justifications behind war. The German forces are never shown and are represented by their weapons (artillery and gunfire) and their machinery (Heinkels on bombing raids).

Above all, DUNKIRK is a very British film although financially it’s a Dutch, French, US and British co-production. We have seen many American films about the Second World War, but the British equivalent seems to have petered out some time in the 1960s. These were made by the generation with direct experience of the war. THE DAM BUSTERS (1955), BRIDGE ON THE RIVER KWAI (1957) and ICE COLD IN ALEX (1958) are very different films stylistically but they come from an era when the mythologising of the British at war, usually meant stories about thoroughly decent chaps played by Kenneth More, Bryan Forbes, John Mills or Richard “Dickie” Attenborough. The latter pair actually starred in a 1958 film also called DUNKIRK.

Nolan’s DUNKIRK does a modern, subtler take on the British hero. Tom Hardy plays Farrier, a Spitfire pilot who sees a lot of action in the “crowded hour” of the air story. There is a faint echo of Noel Coward’s 1942 IN WHICH WE SERVE character in the role of Commander Bolton (Kenneth Brangh) who waits on The Mole and sees the men onto as many boats as he can. Unsurprisingly, it’s Mark Rylance (from television’s WOLF HALL) playing a Mr Dawson, who is the least flashy of this non-showy group. He takes his son and a family friend across the channel on a small wooden boat and is utterly believable as a determined civilian in a dangerous situation, slightly out of his depth. Cillian Murphy’s character “Shivering Soldier” has a small role, but is part of an important plot point as a result of meeting up with Dawson.

Perhaps the star of the show, beyond the stunning practical effects and Hoyte Van Hoytema’s cinematography is Hans Zimmer’s music; like the camera, it puts us right inside the action and it truly never lets up. It’s a figurative ticking clock (that uses the sound of Nolan’s literal pocket watch) and it’s a constantly unnerving presence in this experience. You are in the midst of masterfully created atmospheric tension. At the end, I felt emotionally exhausted by the movie. The 106-minute running time is well-judged by the director.

DUNKIRK opens today and is in wide release in Australia (8/10). 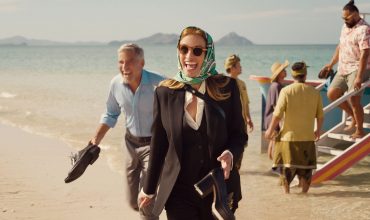 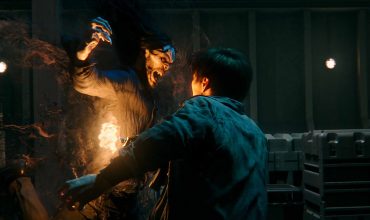