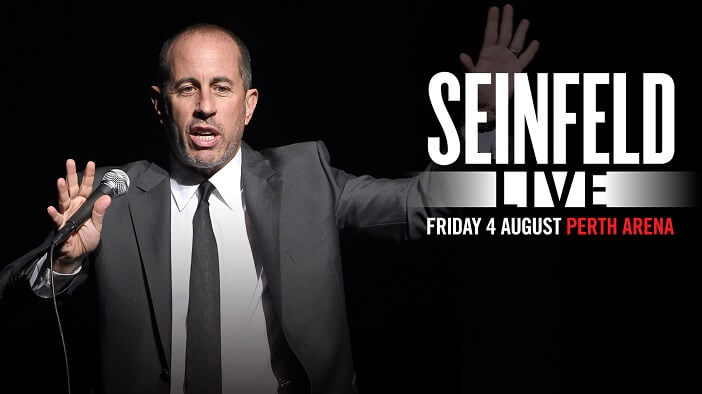 Seinfeld’s Australian tour opens at Perth Arena on Friday August 4, for his first visit to WA.

Tickets go on sale at 10am on Monday 14 November through Ticketek for the five-city tour, during which the world’s master of observational comedy will amuse, provoke and entertain.

It’s the first time Seinfeld has toured Australia in nearly 20 years – he last performed live in Sydney and Melbourne in June 1998.

Seinfeld said: “Australia may be far in miles but I feel very close to the people because of our mutual comedy connection. I couldn’t be more excited about seeing everyone there again.”

Globally known and loved for his eponymous sitcom about nothing, Jerry Seinfeld’s career took off in 1981 after his first appearance on The Tonight Show with Johnny Carson.

Eight years later, he teamed up with fellow comedian Larry David to create what was to become the most successful comedy series in the history of television: Seinfeld. Starring a semi-fictional version of its star, Seinfeld ran for nine seasons, screened around the world and won numerous Emmy, Golden Globe and People’s Choice awards. In 2009 it was named the greatest television show of all time by TV Guide; it was judged the best sitcom ever in a 60 Minutes/Vanity Fair poll three years later.

Seinfeld also has starred in, written and produced movies (Comedian, Bee Movie), directed and produced a Broadway hit (Colin Quinn Long Story Short), and even wrote a best-selling book (Seinlanguage) and a children’s book (Halloween). He directed the off-Broadway production of Colin Quinn: The New York Story at the Cherry Lane Theatre in Greenwich Village.

Seinfeld’s latest project is critically acclaimed web series Comedians in Cars Getting Coffee (comediansincarsgettingcoffee.com), which has garnered close to 100 million views, and which the New York Times describes as “impressively complex and artful” and Variety calls “a game changer”.

President and CEO of TEG Dainty, Paul Dainty said he was delighted to welcome Seinfeld back to Australia: “After 40 years in the industry, Jerry Seinfeld is arguably the best known and most successful stand-up comedian in the world. As well as his long-term fans, this tour gives a new generation of Australians a rare opportunity to see the master at work.”

A New York native, Seinfeld remains active as a standup comedy performer, continuously touring nationally and internationally. This year he has performed a year-long monthly residency at the Beacon Theatre entitled, “Jerry Seinfeld: The Homestand”.

As Rolling Stone said of his Beacon Theatre performance: “The show happily reminded the audience the ridiculous things its members share: lazy diction, contradictory behaviours, vapid rituals, and, of course, the inescapable minutiae that overwhelm our lives. Yada yada yada.”