Mark Hartley, director of the Patrick remake and Not Quite Hollywood (highly recommended) returns to present audiences with The Girl at the Window, a rural Australian thriller that is equal parts serial slasher flick and Nancy Drew. A mix that leaps high, miscalculates and lands painfully on its coccyx.

Small town high school student Amy (Ella Newton) struggles with PTSD after being involved in the accidental death of her father. Living with her mother Barbara (Radha Mitchell), Amy quickly suspects that the mysterious killer stalking her hometown is her next door neighbour and mum’s new romantic interest Chris (Vince Colosimo).

The premise has potential, but is rushed, subtle as a sledgehammer and many plot threads introduced through the film are left behind, abandoned or forgotten. Not satisfied with one, nor two narrative plot twists, there are at least three sharp left and right turns that are both unsurprising and meaningless when considering the story attempting to be told. The film relies heavily on suspending disbelief. Character’s actions aren’t believable while dealing with slasher tropes, fixating on minor details that don’t matter while completely ignoring the obvious.

The Girl at the Window is caught between two genres struggling for attention and neither one is satisfied. The graphic violence inflicted on the killer’s victims is present in all its creative glory, which will satisfy any mainstream body horror aficionado. However, hardcore torture gore porn fans will be left wanting as these scenes are few‌. Murder mystery and investigative fans will find moments of intrigue, but more likely become bored with plodding, unconvincing police work and frustratingly bland exchanges between Amy and her school friend Lian (Karis Kailani Oka). Meanwhile, some key moments are poorly, laughably over acted. Almost to the point of self parody.

Most frustrating of all is the character of Amy, convinced she’s doing the right thing while destroying everyone’s lives around her. If this is the point, it’s a good one but unexplored. If this is accidental, it is unfortunate.

While the film suffers these problems, there are genuinely funny moments, glimmers of brilliance in the direction, squeamish makeup effects and veteran cast members chew their scenes with ease. The Girl at the Window wants to be something from a bygone era of Aussie genre cinema, but cannot best or compare to the greats it’s reaching for (Road Games, Next of Kin). The mood has changed, the world has moved on and Girl at the Window misses the opportunity to carve its unique place in Aussie genre cinema. But as always, your mileage may vary.

Girl at the Window releases 18th August and rates five out of ten annoying characters.

Luke Harris
Luke is writing short stories, screenplays and film reviews when he's not at the day job or looking after the needs of his family. So one Powerball...
5 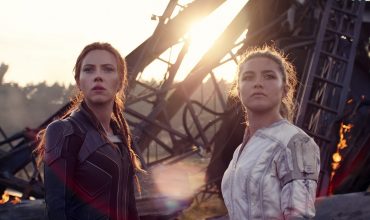