Trickster demigod Maui is powerful. He discovers the secret of fire. He hauls up islands from the sea using his magical fishhook. He snares the sun to make it travel slower. Finally, he steals a greenstone “heart” that belongs to the goddess Te Fiti in order to give it to humanity. Here he goes too far and is attacked by the lava demon Te Ka. Maui loses the heart and his fishhook in the ocean. He is left powerless, stranded on land.

Years later, on Motunui, a Polynesian island, Moana the daughter of the Chief is chosen by the ocean to take the greenstone heart, find Maui and make him return the stone to the goddess Te Fiti. This quest has great importance because Maui’s theft of the heart has caused an imbalance in the ocean. Moana’s home Motunui is slowly dying as a result. The coconuts are going bad, the fish are scarce, soon her people will have no way to live on their beloved island. Moana is not an experienced sailor, but she is growing to be a leader of her people and she knows she has to take action in order to save her home. She sets out to sea.

MOANA is Disney’s 56th animated film. The musical comedy is the first to be based (in part) in Polynesian mythology. Although LILO & STITCH is set in Hawaii, the story is a contemporary adventure involving an extraterrestrial. By contrast, MOANA draws from Polynesian folklore and uses character and stories with which the international audience is largely unfamiliar. Half the fun of this movie is enjoying the Pacific Islander legends presented in a sparkling 3D animated Disney film.

Moana is voiced by teenage Hawaiian actress, Auli’i Carvalho, Maui is voiced by Dwayne Johnson. Both are excellent and create a comedic friendship that is marked with much bickering and rivalry. Moana is brave and has great perseverance, but she is young and has to face many obstacles in her quest. Maui is powerful and impressed with himself and sees no reason to comply with Mona’s plans for him. The rest of the voice cast has a large contingent of New Zealand talent, including Temuera Morrison, Oscar Kightley, Rachel House (who plays Moana’s grandmother) and Jemaine Clement who puts a Bowie-esque spin on his portrayal of Tamatoa, a giant crab.

The movie combines top-flight animation, proven musical and performing talent to create a thoroughly enjoyable and slick entertainment. Disney continues to run variations on its Princess formula for fun and profit. At one point, Moana makes it clear to Maui that she in no mere princess but the daughter of the Chief and she will be the leader to her people. There are the usual messages of being oneself and working to realise a dream. This is the family-friendly Disney musical one has come to rely on from the Mouse House. The songs range from the adequate to the earworm variety. The comedy is well executed and mostly stays away from easy pop-culture targets to keep the whole thing timeless. Everything works; the Pacific Island mythology and setting is beautifully realised and it will entertain young and old alike.

MOANA is currently in wide release in Australian cinemas. 113 minutes. (8/10) 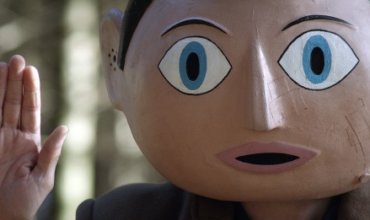