I don’t think M. Night Shyamalan understands what people actually liked about The Sixth Sense and it seems like no one’s bothered explaining it to him in 20 years. I say this as someone who still has not seen Split (I’ve heard it’s the exception to the rule that has plagued the better part of two decades of his filmography) but who has developed a great fatigue for Shyamalan’s perception of his own ability to tell and then wrap up a satisfying mystery. In accepting a screener for Old based purely on thumbnails I’d seen of the cast (Thomasin McKenzie? Yes. Vicky Krieps? BIG yes) I felt a sinking feeling in my stomach upon finding out that it was a Shyamalan film. But I’m turning 30 this year and it’s about time I tried to be an adult rather than literally saying “ew” at things I don’t like, so I cleared my mind and my schedule, and decided to go in like an innocent li’l baby with no preconceived notions about the world and no general dislike for a man who greatly overestimates his skills.

Old is based on Pierre Oscar Levy’s graphic novel Sandcastle and follows a family of four on what (unbeknownst to the children) is their last holiday together. They are driven in a private car to a luxury hotel that Mum Prisca (Vicky Krieps) “can’t believe she found online” and they get settled into their lodgings. Dad Guy (Gael Garcia Bernal) asks her when they are going to tell the kids that they’re splitting and they get into a heated argument that the thin walls of their condo can’t muffle from kids Maddox and Trent (11 and 6). Like all unhappy middle class parents, they then take the kids out to the hotel restaurant and pretend like everything is wonderful as they plan their day. The concierge approaches them and tells them about a special island with stunning beaches and rock formations that is undiscoverable to plebs (I’m paraphrasing) and the family takes up the offer, being driven to the ominous second location with another family by none other than Shyamalan himself (who can’t just stay behind the camera.)

The other family is made up of heart surgeon Dad Charles (Rufus Sewell), Instafluencer Mum Chrystal (Abbey Lee), their young daughter Kara, Charles’ mother Agnes, and her gorgeous little terrier who you know isn’t going to last long. As soon as they start exploring the beach and rocks, odd things happen. Bodies wash up. Charles can’t get his priorities straight as he obsesses over the name of a film that stars Jack Nicholson and Marlon Brando. The kids age up about seven years as everyone is preoccupied, and the panic of realising that they’ve got less than a day of life left and can’t seem to get off the island without blacking out or drowning starts to set in. No one wants to get old, but it’s less than ideal to have to do it on a mysterious island at warp speed, and it’s a premise that initially is very interesting.

This is a frustrating film both to watch and to review, so I’ll focus on some positives first before inevitably reverting to shit-talk.

There is some interesting camera work in the first act and the scenery is breathtaking, with the looming rocks giving off similar vibes to those in Peter Weir’s classic Australian mystery about picnics and why they’re dangerous. And speaking of Australians, it was very cool to see them making up such a sizable chunk of the cast – Abbey Lee, Eliza Scanlen and honorary Australian Thomasin McKenzie (New Zealanders count until they do something naughty and we relinquish our claim) all do satisfactory work but particularly Lee, who is given a vapid role and the lower budget ageing makeup, but manages to revel in her horrific final form that manifests in one of the more memorable scenes of the film.

There’s not a lot technically wrong with the film – it looks great, it (mostly) paces itself well, and some of the performances are convincing and committed. Aged up kids Maddox and Trent as played by McKenzie and vessel of Paimon Alex Wolff manage to pull off children who skipped the puberty talk before being in the midst of it, and Rufus Sewell does Mr Hyde with a scary level of efficacy. The addition of Ken Leung as the voice of reason (for a time) is a smart move as he sells time oddities in a realistic way, and it makes the Lost similarities quite stark.

And like Lost, it seems like a lot of this is being made up as it goes along. The mystery drags on for so long that by the end I had stopped caring why all of this was happening and actually hoped I didn’t find out as it might make the theme of “life is short, enjoy your time” more meaningful. What the flawed Abrams/Lindelof machine had going for it though were the characters – people kept watching through the chaos and silly tangents because of the work that was put into developing the beloved folk of the island.

Old has no such saving grace. Some of the dialogue given to Prisca and Guy is truly awful and despite being portrayed by the two most acclaimed actors, Krieps and Bernal can’t salvage anything through their performances. Guy constantly reminds everyone of the statistical chances of things because he is an actuary, but really he is just the “well, actually” man. That detail made sense for Ben Stiller’s neurotic character in Along Came Polly but it’s just annoying here. Krieps is given some very on the nose lines to deliver, like “I can’t wait to hear your singing when you’re older” and bears the brunt of the obvious foreshadowing. They are the least interesting characters until the very end, when their story finally becomes belatedly sweet and affecting. One scene, for the briefest of moments, reminded me of the brilliant The Red Turtle – an animated film with absolutely no dialogue that achieved in the first five minutes what this film took an hour and a half to do.

Ultimately the biggest (and perhaps most ironic, but Alanis Morrissette has confused me forever) problem with Old is that it’s too long. This is a story that should have been a scary and melancholy short film and would have more of an impact were it in the hands of someone capable of showing restraint. We’re talking about a director who once made a movie with arboreal antagonists causing great confusion to Mark Wahlberg, but some subtlety would’ve been nice. By the time we reached the rushed, twist ending I felt the words of Homer (Simpson) escape my mouth: “oh I see! Then everything is wrapped up in a neat little package!”, and while his sarcasm was unintentional, mine was not. 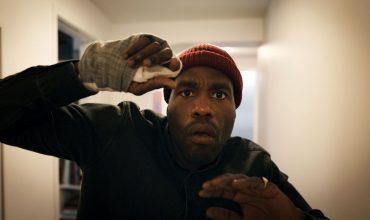