When an unseen enemy threatens mankind by taking over their bodies and erasing their memories, Melanie will risk everything to protect the people she cares most about. Proving that love can conquer all in a dangerous new world.

As a Twilight fan, I was über excited about seeing another Stephanie Meyer novel adapted for the silver screen. The trailer looked interesting and there was some definite eye candy. I found myself interested in the story during the first act, but my curiosity quickly deteriorated for the rest of the films progression. The introduction carried suspense as we had no idea what these aliens wanted, but with a lengthy second act I found myself unsure; the film was a little predictable. Stephanie Meyer, after all, is the master of a complicated love triangle. With elements of the love triangles outcome mimicking the famous TWILIGHTS’, it reeks of déjà vu (even thought THE HOST was written before the TWILIGHT saga).

If there’s one thing that Hollywood never lacks, is the set design and visual elements of a film. THE HOST had quite the believable set and was visually pleasing. The stainless steel look Lotus cars, helicopter and motorbikes the aliens drive felt cliché. I never understood how they were always so clean and shiny even after driving in the desert for hours. The capsules the aliens lived in looked like stainless steel footballs and the alien itself isn’t a person or living thing, it’s more like a fluorescent ball of sperm.

The hypnotising eyes of the alien species that had taken over the humans was strange. That was the only difference between human and alien – you’d think with todays technology the humans would have found a way the disguise themselves other than wearing sunglasses when they needed supplies. The grocery store was just labelled ‘Store’ and filled with ‘home brand’ products. Whether or not this was because of the invasion, it looked cheap.

Saoirse Ronan who plays Melanie/Wanda showed little expression throughout the film. This was beyond frustrating as it felt like history repeating with the character of Bella in TWILIGHT. I understand Wanda is an alien, but they are suppose to tell the truth and having no expression was certainly not telling the truth. Then I got thinking, and maybe it’s not so much the actors, but the characters Stephanie Meyer writes. After realising this, the anger inside me cooled a few degrees.

The voice over for the character of Melanie trapped in Wandas head was beyond distracting especially during intimate and sincere moments of the film. It was almost comedic in a not-so-funny way. Aside from these distractions, there is some amazing eye candy with Max Irons playing Melanies love interest and Jake Abel playing Wandas love interest. This creates an interest in the relationships which later fades as the film becomes lengthy and uninteresting during the second act.

If you were on the fence with the TWILIGHT saga, I wouldn’t recommend watching this film. If you enjoyed TWILIGHT and like a bit of sci-fi with romance. Give it a look. I give THE HOST 3/10. 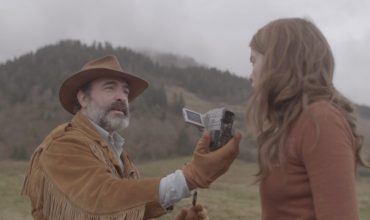