Netflix continues to up its film distribution sector, with another original release to add to the growing pile. This time it’s American comedy-drama THE MEYEROWITZ STORIES (NEW AND SELECTED).

Receiving a reported four-minute standing ovation at Cannes Film Festival, and with such a stellar cast, it’s surprising to see this flick picked up by Netflix as opposed to a cinema distributor. With acting chops/celebrity punch like Dustin Hoffman, Emma Thompson, Ben Stiller and Adam Sandler, surely it would have sold tickets? Or perhaps we are underestimating the power of the film streaming service: Perhaps “cinema release” in our own loungeroom really is the future…who knows? All I do know, is that THE MEYEROWITZ STORIES (NEW & SELECTED) deserves a large audience, whether it be via the silver screen or your trusty Smart LED TV.

THE MEYEROWITZ STORIES follows a strained family that are loosely – and precariously –  knitted together by their impossible artistic father Harold (a brilliant performance by Hoffman). When Harold falls seriously ill, the estranged family are forced to come together. It’s a simple plot, and nothing particularly new. What makes TMS unique is its clever and realistic writing, and the strong performances by the impressive cast…yes, including Sandler.

It’s a slow burner; admittedly it took a few scenes for me to become ‘invested’. This is likely owing to the fantastic performance of Hoffman, who is so unapologetically aloof and thus difficult to connect with. It’s the vulnerabilities of his emotionally neglected children that provide the audience connection.

TMS gives us a window into the life of this family over a sustained period of time; it’s not your typical narrative structure but is easy to follow. It’s divided into nice little chunks, separately divulging the stories of each child.  The clever writing doesn’t give away too much too quickly. Much like life; you often make the connections after the event, not during.

Writer Director Noah Baumbach shot TMS on film, arguing digital can’t capture the emotion as film does. It’s a continuing debate. There is a warmth and rawness to shooting on film that works for this movie, though it could also explain why the vision is ever so slightly blurred in parts… I was cursing my internet connection at times, initially blaming a lag in speed for the less-than-crisp image….sorry NBN! I falsely accused you.

THE MEYEROWITZ STORIES (NEW & SELECTED) combines an excellent cast with brilliant writing to produce a heartwarming film. It’s a predictable story communicated in an unpredictable way. 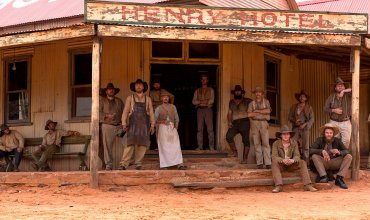 A Stitch in Time Review 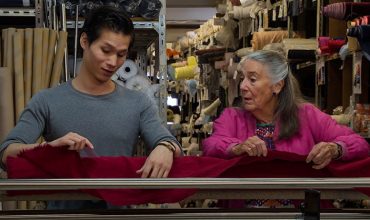