Jesse (Elle Fanning) is recently arrived in Los Angeles. She is sixteen-years-old and aspires to be a model. Her agent Roberta (Christina Hendricks) advises her to say she is nineteen in order to work. Roberta arranges a test with an A-list fashion photographer and from there, Jesse’s star begins to rise.

THE NEON DEMON is Danish director Nicolas Winding Refn’s latest film. He has been making features for twenty years, yet it was his DRIVE (2011) that gained his work a significant fan-base. His ten previous drama features commonly focus on male violence, so Winding Refn wanted to make a film that was female-centred. He wrote the screenplay with Mary Laws and Polly Stenham (both of whom are also playwrights). As with his pictures from BRONSON (2008) onward, his latest is very much an auteurist work with a singular vision. Or to put it another way, if you see this movie, you’re in Nicolas Winding Refn’s world, a vantage point from which you may occasionally glimpse the planet we live on.

The Los Angeles that Jesse discovers is as unwelcoming as any portrayed in the movies. She stays in scummy motel in Pasadena and has a number of humiliating experiences at various modelling gigs. Her friendships are questionable; everyone is using each other to get ahead.  And her relationship with a nice guy called Dean (Karl Glusman) feels unstable.

The film has been described by some as plotless and empty, I would argue it has plenty of storyline, but it doesn’t have the familiar narrative arc we’re all comfortable with from mainstream cinema. Jesse is the small town girl who arrives in the city with big dreams à la the original A STAR IS BORN (1937) but what happens to her is a series of events of greater or lesser surrealness.

The performances have also been criticised, but if you buy what Winding Refn (hereafter NWR) is selling, then they are entirely on point for this strange fantasy. Fanning is excellent. Jena Malone is excellent also. She plays Ruby, the makeup artist who befriends Jesse and offers the advice that she “needs good girls around her”. Australians Bella Heathcote and Abby Lee play Jesse’s rival models. Local audiences may know Heathcote from her Neighbours days. She is solid playing an American model who is apparently nice. Abby Lee (who has dropped her last name Kershaw) brings her Aussie accent and is particularly good as the intensely envious Sarah. Her experience as an actual model fed into the key scene where she, Jesse, and eight other models, attend a casting call for a place in a designer’s next show.

This film has polarised opinions. It’s a slow-burn for some and merely slow-moving for others. Some see it as over-the-top indulgence and others as a bold melodramatic fable. It has been described as a psychological horror, which it is in part, but it is also a sparkling nightmare with a pulsing electronic soundtrack by Cliff Martinez. The cinematography and sound design are absolutely first rate. This film about surfaces has a dazzling one itself. Whether it has anything on its mind is highly subjective. I found it an intermittently entertaining meditation on narcissism and selfie culture. NWR has paid tribute to Italian Horror master Dario Argento with some of the imagery. There are also thematic traces of movies like BLACK SWAN, MULLHOLLAND DRIVE and possibly ALL ABOUT EVE, but ultimately this is its own thing. 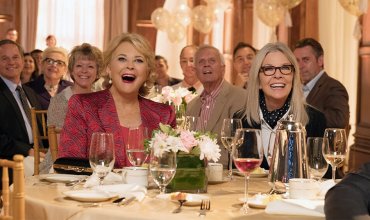