THE TOLL is a gloriously bizarre little film. It’s probably best described as a Welsh Western. Well, it is set in West Wales, so that tracks. A bit like Fargo, a bit like Lock, Stock, and Two Smoking Barrels. It’s so strange, so madcap, and so amazing…

In summary: it’s hilarious, but in that way you’re also kind of scared about what comes next.

Annes Elwy (Little Women, The Hidden) plays Catrin. She’s a country cop at the end of a long shift. Her last call of the night is to see Toll Booth (Michael Smiley). Toll Booth doesn’t have a name. He’s too scary for that.

Toll Booth works at the village toll booth. He charges tourists to use the road, collects mail. He generally lives a quiet life. But he’s also running a ruthless black market. Making a killing as a loan shark, smuggler, enforcer, and anything else that comes along.

It’s really funny seeing Michael Smiley in this role. His comic timing, as always, is perfect. I’m so used to watching him in police dramas, usually as the IT professional going through a suspect’s computer. Usually very clever, maybe a little odd. But always kind at heart. And it’s this calm and collected exterior that makes him so convincing as a dangerous man with a dark past.

Cathrin the cop is tired, soaked by rain, and very ready for bed. She’s also driving around with the ashes of her dad, so she’s got her mind on other things. The toll booth is meant to be a quick stop before she clocks off for the night.

Then Toll Booth starts his tale. And he insists on starting hours earlier, right at the beginning. He says it’s to build an atmosphere. Catherine looks like she might hit him. She’s so frustrated that I felt a bit frustrated on her behalf. I’m already empathising prettily heavily, and we’re only a few minutes in.

From there, things get hectic. Toll Booth’s a hell of a storyteller. He’s had a hell of a day.  I’m instantly hooked. There’s violence, comedy, double-crossing, Star Wars references. It’s non-stop action. But, and this creates a challenge: the story is being told out of order.

Toll Booth is telling the story how he likes, for maximum drama and mystery. But I’m not tired. I’m paying attention, and there’s all these storylines weaving together. I can’t wait for the payoff. I’m laughing at the jokes about city folk, and cringing at the hyper-violence. I’m also loving this adorable dog that keeps begging for Toll Booth’s sandwich.

The characters are eccentric and memorable. Iwan Rheon (famous as Ramsay Bolton from Game of Thrones) brings the same wild-eyed intensity to his role as Toll Booth’s money-collector. There’s the old-fashioned Welsh farmers. The social media savvy triplets at the beginning of their crime spree. The blind man who seems to know everything. And poor police officer Catrin, who is just so damn tired of it all.

THE TOLL is an impressive piece of hyper violent crime-comedy. At only 83 minutes, it never drags. And while there are some unlikely coincidences, the film moves past them quickly enough you’ll barely have time to notice.

THE TOLL is eccentric, enthusiastic, and funny from start to finish.

Only the Brave Review 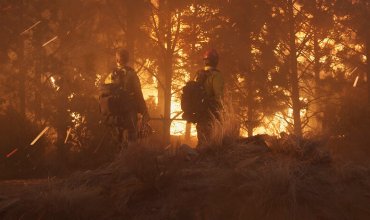