The War with Grandpa was a book written in 1984 by Robert Kimmel Smith. It was aimed specifically at children and has been studied and written about by a couple of generations of American school-kids. Like any work that has become the fodder for enforced reports, this book is loathed by some. However, Accessreel has been researching the matter for at least two days and we can confirm that generally, people like this book, and call it cute and laugh-out-loud funny.

Which is why, a mere 36 years after it was written, The War with Grandpa has been adapted into a family comedy starring Robert De Niro as Grandpa. The set-up is this: Grandpa Ed is not coping living alone after the death of his wife. His daughter Sally (Uma Thurman), decides to move him into the home she shares with her husband Arthur (Rob Riggle) and their three children. Unfortunately, their house is small and the middle-child, 12-year-old Peter (Oakes Fegley), has to move into the attic. The attic is dusty and crowded and not in the best condition. Peter feels he has been betrayed by his parents. Even though he loves his grandfather, he begins pranking Ed, in the hopes that he will move out. Ed, however, is a war veteran and more than happy to take on what he considers the pitiful efforts of his grandson. He meets with Peter and they draw up rules of engagement for their war.

This cues a series of pranks involving items such as doctored shaving cream, live snakes and booby-traps. The war escalates and the strikes and counter-strikes become more and more elaborate. The conflict even draws in Peter’s school friends and Ed’s elderly buddies (Christopher Walken, Cheech Marin and Jane Seymour). At one point, the two teams even face-off at dodge ball.

This film is family-oriented as both warring sides get more or less equal screen time; meaning this isn’t a kids’ filmed disguised as a family film. This is an ensemble effort where everyone gets a moment or two for “a bit” to generate laughs. The most reliable laugh-getter is Rob Riggle who brings off several scenes with his usual skill, even though his trademark aggressive energy is dialled right down.  Thurman has some good scenes as she becomes increasingly exasperated with her son and her father. The rest of the cast does OK. If you’re an oldster like this writer, you will probably enjoy a couple of moments from Walken, Marin and Seymour. The kid characters are talented and annoying and likely to connect with their segment of the audience. Kids will want Peter to have a win in some way because he is also a victim of bullying at his school.

Director Tim Hill has a massive back catalogue of animated television productions and movies (particularly the SpongeBob SquarePants franchise). He has also directed and live-action features with animated characters such as GARFIELD 2 (2006) and ALVIN AND THE CHIPMUNKS (2007). He is a veteran of the family comedy genre (which we’ll call fam-com, right, Accessreelers?). Writers Tom J. Astle and Matt Ember often work as a duo and are responsible for films such as FAILURE TO LAUNCH (2006) and GET SMART (2008). They also wrote the animated fam-com HOME (2015). The director and writers are an experienced team who have created a slick production that steadily delivers the family-friendly laughs over the duration of the movie’s 1 hour and 34 minutes.

For those who approach THE WAR WITH GRANDPA hoping that De Niro is going to morph into Travis Bickle or Max Cady, sorry, that doesn’t happen. Grandpa Ed doesn’t go even a little bit psycho. However, this film will lightly amuse adults and more solidly entertain kids. And that is something worth shelling out your Aussie quids for, if you want to enjoy a fam-com with your family, over the holidays. (6/10) 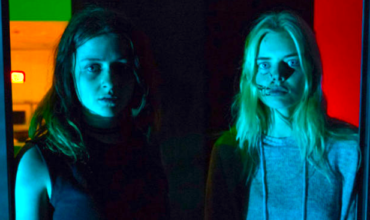