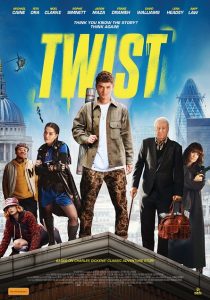 Twist is a Dickens’ classic brought thrillingly up to date in the teeming heartland of modern London, where a group of street smart young hustlers plan the heist of the century for the ultimate payday.

Twist is directed by Martin Owen (The Intergalactic Adventures of Max Cloud) also stars David Walliams (After Ever After) and Noel Clarke (Bulletproof). The film is produced by Unstoppable Film and TV, Pure Grass Films, FAE Film and Television, and is co-produced by Sky and Red Bull Media House. Twist is written by John Wrathall (The Liability) and Sally Collett. Producers are Matt Williams, Ben Grass, Jason Maza and Noel Clarke.