A young couple, Tom (Jessie Eisenberg) and Gemma (Imogen Poots), looking to start their life together in their first home, visit the sales office for a new housing development, Yonder. Despite their reluctance towards the strange estate agent, Martin (Jonathan Aris), they agree to visit the housing estate. Martin shows them house number nine – one in a seemingly endless row of identical hospital-green houses on a nameless street. However, while the couple are looking around the house, Martin disappears, leaving Tom and Gemma alone in an empty and labyrinthine suburbia. No matter which way they turn, they find themselves always returning to the same house – number nine. They quickly realise they are trapped in the vacuous hell of an empty, infinite suburbia. Soon, they are given a task – “Raise the child and be released.”

Vivarium is directed by Lorcan Finnegan, who co-wrote alongside Garret Shanley. If you’ve been looking for an unnerving quarantine flick, look no further than Vivarium. This is a film heightened by its context. Though its producers never could have predicted the film being released at such a pertinent time, Vivarium is eerily suggestive of the claustrophobia of social-isolation. Our global stillness amplifies the suffocating quiet of Vivarium.

The title perfectly sums up the film’s intention – vivarium means ‘to live’ and also describes an enclosure in which animals or specimens are kept for observation. Beneath the psychological thrill are complex themes of the soul-crushing imprisonment of suburbia, alienated motherhood, the futility of suburban life, and the parasitic and cyclical nature of the ‘ideal family’. And while the leitmotif of suburbia has been picked clean as a literary symbol of claustrophobia and confinement, this film feels original and intriguing. The film’s light, quick pace doesn’t stagnate or dwell on unnecessary detail.

Eisenberg and Poots fall easily into a natural couple dynamic, strained under the pressure of the sudden imprisonment. Vivarium is deeply unsettling from the beginning. At its climax, this gripping film peels back the thin veneer of sanity to reveal destabilising absurdity.

The set design, the lighting, the materialisation of Yonder is Tim Burton-esque, but lacks all the excitement and grandeur of his style. Instead, Vivarium is colder, vacant, and somehow encapsulates the feeling of being in a nightmare, and all the absurdities of time and spatial dimensions that entails.

Vivarium is available on VOD via Google Play, iTunes, Telstra, Fetch and Umbrella Entertainment and on Foxtel on Demand from May 6. 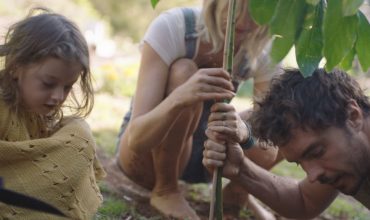 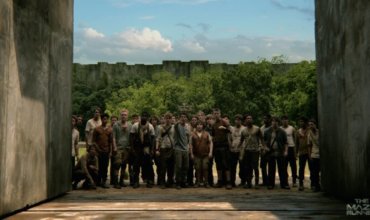