On a job to hunt a mountain lion, U.S. Fish and Wildlife Service agent Cory Lambert (Jeremy Renner), discovers the frozen body of Natalie Hanson, an 18-year old resident of the Wind River Indian Reservation in Wyoming. She isn’t properly dressed, she has no shoes and she is bloodied. He informs her family and contacts the local policeman Ben (Graham Greene). Eventually, rookie FBI special agent Jane Banner (Elizabeth Olsen) arrives to determine whether a murder has been committed. The crime is on a reservation and that makes it a matter for the federal government.

It quickly becomes clear, that apart from her immediate family, no-one cares about the young, deceased Natalie (Kelsey Asbille). Lambert feels beholden to discover the truth because his ex-wife and his son are related to the Native Americans at Wind River. Although not a law man, his job gives him the skills to help the new FBI agent. Banner is out of her depth, but also wants to see justice for the victim.

As Lambert and Banner travel around the district investigating and interrogating suspects, they are moving through a frozen landscape that can swallow those unlucky enough to be caught without sufficient transportation or shelter as Natalie Hanson was. The people of this place are hiding, protecting themselves until spring. When the duo discover what happened to kill Hanson, they find themselves in greater danger than they could have imagined.

WIND RIVER is Taylor Sheridan’s second feature as a director, however it is his third feature as a screenwriter. He is also responsible for 2015’s SICARIO (directed by Denis Villeneuve) and 2016’s HELL OR HIGH WATER (directed by David Mackenzie). All three movies represent a kind of trilogy that Sheridan has described as his ‘American Frontier’ films. Each one has characters struggling in physically challenging locations; the US/Mexican border in SICARIO and West Texas in HELL OR HIGH WATER. The law and its inadequacies are examined in all three stories.

Jeremy Renner plays Cory Lambert as an earnest man trying to improve his life. He excels at characters who are struggling. Marvel’s Hawkeye is about as straight-forwardly heroic as he ever gets. Lambert is essentially a loner who watches, measures and takes his time to sum up people. He is unflashy and uninterested in impressing others. Olsen’s Banner does want to advance in her job, but will do that through hard work rather than departmental politics. She is not dissimilar to the Emily Blunt character in SICARIO. Graham Greene’s participation here is also noteworthy. He is as solid a movie presence as ever.

In some ways, WIND RIVER is the smallest of the three films, but in terms of the history it touches on, perhaps it has the largest scope. HELL OR HIGH WATER is also connected to the Native American experience and this is more deeply explored here. Sheridan makes a point about the way Indian deaths are regarded as unimportant outside of their communities and the deaths of Indian women, doubly so. This is what runs beneath the investigatory tale and exciting action sequences. Sheridan tells stories about Americans far from living a dream; they’re dealing with the consequences of race, poverty, drugs, crime and business.

WIND RIVER is well-acted, exciting and engrossing drama with some serious themes running beneath its beautiful surface. 111 minutes duration. (7.5/10) 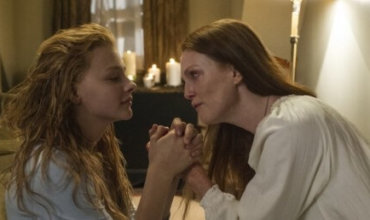 Girl at the Window Review 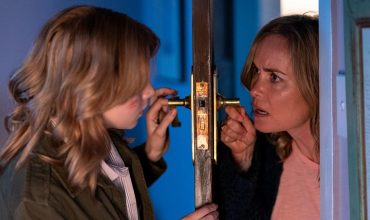