A pistol points directly at the face of a “ramen noodle-headed” Christopher Abbott as he stares intently at someone off-camera. “I love you man. You’re my best friend,” comes a voice from the weapon’s wielder and director of On The Count Of Three, Jerrod Carmichael; he too stares down the barrel of a gun held by his buddy. The pair start to count towards their demise but they’re hilariously out of sync (perhaps it’s nerves or the fact that at least one of them probably shouldn’t be doing this). So sets the tone for a film that finds humour in suicidal tendencies and heart in childhood friendships that outlast the pain through which they were formed.

Val (Carmichael) and Kevin (Abbott) wish they were dead and one of them very nearly just granted his own wish. Earlier that day, we meet Kevin in a psychiatric hospital after failed attempts at overdosing on pills and at convincing the hospital’s evaluator that he doesn’t need to be there. Val is in a different kind of prison; he works at Ritchie’s Feed & Seed Inc and just received the high honour of being promoted from shovelling mulch to overseeing the mulch as Floor Manager. He’s also ghosting his girlfriend for no apparent reason and thereafter, finds out that she’s pregnant with his child. It’s enough to send him to his workplace bathroom to hang himself with his belt, only to be interrupted by a colleague’s urinal rendition of Travis Tritt’s heinous country hit ‘It’s a Great Day to Be Alive’.

Val promptly quits his job and breaks Kevin out of the psych ward with a scheme involving a cigarette and a careless ward nurse. But he has ulterior motives, as Kevin discovers when asked to rummage through his backpack. Beneath a bottle of whisky and a couple of shirts are two handguns. “I think you and I should kill ourselves, Kevin,” Val says in the same matter-of-fact tone that children use when deciding to be Best Friends For Life, and the boys head to the outer side of a strip club in broad daylight, where they won’t be bothered. We’re back to the beginning but not particularly close to the end, as Kevin decides they should maybe make the most of their last day on Earth and reschedule for an evening double suicide.

For the remainder of On The Count Of Three, we follow Val and Kevin as they run through an impromptu bucket list that involves confronting Val’s abusive and elusive father (JB Smoove), revisting an old dirt bike ring run by their old boss (Lavell Crawford), trying to pacify Val’s pregnant and justifiably furious girlfriend (Tiffany Hadish) with stolen cash and murdering the psychiatrist who molested Kevin as a child (Henry Winkler). It’s a lot to pack into 86 minutes but Carmichael and his team (mostly) pull it off with aplomb.

Premiering at Sundance last year, this is Carmichael’s feature debut as a director. With a screenplay by Ari Katcher and Ryan Welch (Katcher worked with Carmichael previously on sitcom The Carmichael Show and both are co-creators of Ramy) and cinematography by Marshall Adams (of Breaking Bad, El Camino and Better Call Saul), the foundations for black comedy are strong. That the film still manages to be funny as comedians left, right and centre play against type and turn in fine dramatic (and even scary) performances is an achievement in itself.

Never is this more apparent than in the naturalistic banter that occurs between Val and Kevin. Their dialogue serves as social commentary on multiple occasions, like Kevin’s feeling of hypocrisy over using a gun despite his heavy gun control stance on social media, or Val’s worry that the media will infer inceldom as the motivation for their acts. Kevin’s incessant need to guess where Val’s story is going instead of just listening rings true for so many relationships, and his cringey, drunken attempt to discuss race with his black best friend while being chased by police elicits eye rolls and requests for quiet that would silence any over compensatory ally in a comments section. While both lead performances are to thank for the film’s most successful aspects, it is Abbott in particular who shines. 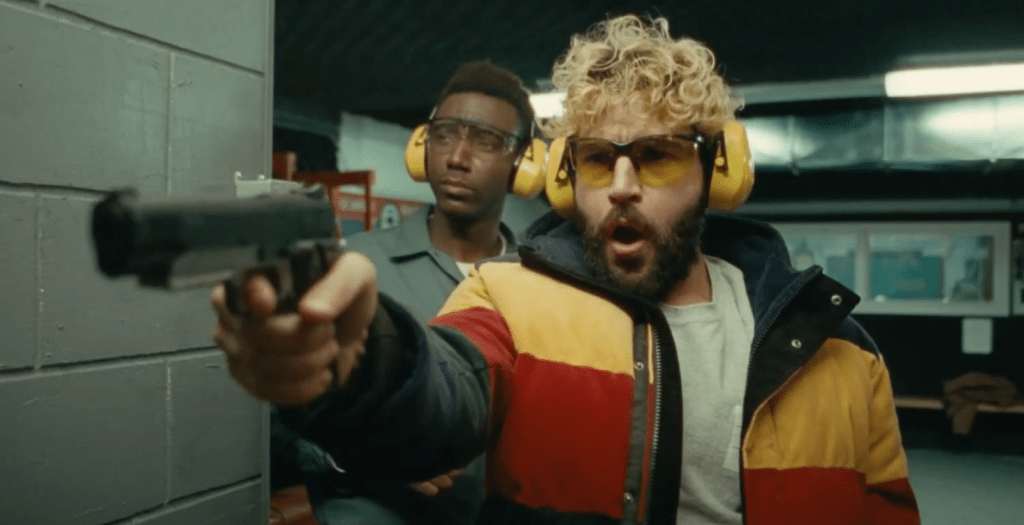 Target practice with Val, Kevin and a completely unscathed cut-out of a man

Like many millennials searching for an update to Sex And The City post-high school, I was introduced to Christopher Abbott as Marnie’s puppy dog boyfriend in Girls. Following with a varied body of work that includes Martha Marcy May Marlene and James White, and taking daring turns as a murderer both made and unmade in Piercing and Brandon Cronenberg’s quite singular Possessor, Abbott has been one to watch for some time now. With the “sad-eyed” (or so everyone calls him) Kevin, he may have delivered his best performance yet. Kevin is Seth Rogen by way of the Safdies; he is Good Time’s Connie if Connie had a better sense of humour and actually cared about anyone but himself. We can see the inner workings of his quick-to-anger mind in these sad eyes but also the love he has for his friend of over two decades, particularly in his refusal to compare their pain despite the imbalance in severity.

Kevin’s stuntedness from his childhood trauma displays itself in familiar ways; in his preference for Papa Roach’s most famous (and perhaps only?) hit and other objectively terrible songs that “cornily” describe his current situation; in his hanging onto teenage rage over a chance meeting with the guy that used to bully him; in the levity with which he treats very serious factors pertinent to the task at hand (like not being able to land a single shot on the target at the shooting range and brushing off whether or not the safety was on). One of these men has a future and one is stuck in the past, and it makes the themes of childhood connection that much more powerful.

Like kids pledging to jump into a pool in unison or race each other to the end of the street, Val and Kevin’s flippant suicide pact is treated with much the same level of thought. And that is because Val is the instigator and his motivations seem entirely escapist, a theory supported by the ease with which the pair momentarily abandon killing themselves for other playful distractions (like dirt bike riding and going to a gun range). The inclusion of The Free Design’s ‘Love You’ (a song used in a variety of company advertisements but notably for Australians, a TV commercial for Peters Drumsticks) is the biggest hint that perhaps Val has known for a while that he’d only get one last day with his best friend, regardless of how it all ends. The intricacies of the story become more meaningful the more you dig, but that’s not to say that On The Count Of Three is without its flaws.

The film suffers from a script that probably needed further edits as the ending feels a little rushed and underwhelming. Comparing it to another buddy (assisted) suicide film, this fails to pack the punch that Paddleton did in its final minutes. There are also problems with the way some of the characters are written. It could be that Carmichael was stretched too thin from directing and starring, but Val is not as well-developed as Kevin and we never really understand his feelings and motivations before they are resolved too soon. Winkler’s criminally still-in-business psych aside, the supporting characters feel like cameos and we don’t experience their impact (in the short scenes they inhabit) as much as we should.

Somewhere within On The Count Of Three is a more polished, consistent film. But for the most part, this is a remarkably impressive debut from Carmichael and an encouraging look at what his future filmography may comprise (which currently includes a reunion with Abbott for a Yorgos Lanthimos film and a screenplay for a Django Unchained sequel.)

It’s nice to have a mate who will kill for you, but having someone who’ll pull the proverbial plug if you ask them to…now that’s a friend. 7/10 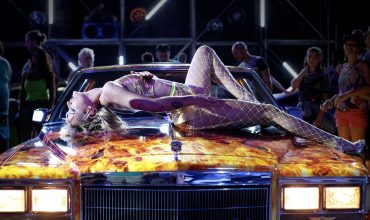