Tony Webster (Jim Broadbent) is a Londoner in his 60s. He runs a camera store that sells expensive second-hand Leicas, but this passes the time rather than keeping him fully occupied. His working day allows him time to have leisurely lunches and annoy his ex-wife Margaret (Harriet Walter) over the telephone. She is a QC and still has a busy life which includes their pregnant, single, 37-year-old daughter Susie (Michelle Dockery).

Tony receives a letter from the law firm handling the will of an old friend or. more precisely, the will of Sarah Ford, the mother of an old girlfriend called Veronica. Sarah, who died six-months previously, had come into the possession of a diary and she wills this and the sum of £500 to Tony. He is intrigued by the letter and begins enquiring after the diary and the whereabouts of Veronica.

In flashbacks to the 1960s, we get a sense of the kind of person Tony was. We see him as a teenager with a privileged upbringing; he is a schoolboy and then a university student; something of a dreamer with bookish, intellectualising friends. As he says in voiceover, his life moves from one holding pen to the next larger holding pen. He wants to write, but is caught by the creative spirit of the times, rather than having something to say. He meets Veronica and is completely taken with her. They become “sort-of” boyfriend and girlfriend and he never comes close to understanding who she is. They spend a somewhat awkward weekend with her brother and parents at their estate. Veronica’s mother Sarah (Emily Mortimer) is an unsettling presence.

In the present, Tony discusses this history with his ex-wife and his old school-friends and he becomes somewhat obsessed with the idea of finding Veronica in the present day. As he turns up reminders of the past, we begin to wonder if Tony’s rosy recollections are as accurate as we have been led to believe.

THE SENSE OF AN ENDING is based on a slim novel by Julian Barnes that won the 2011 Man Booker prize. It has been adapted by screenwriter Nick Payne and directed by Ritesh Batra (The Lunchbox). Given the source material, the film is unsurprisingly, a slow-moving meditation on age and memory. Jim Broadbent is in a restrained mode here and the movie is mostly about this performance. Harriet Walter is believable as the ex. She and Broadbent show us the remnants of a forty-year relationship. Young Tony is played by Billy Howle. Young Veronica is Freya Mavor and present-day Veronica is Charlotte Rampling. The performances are good and if you get into the rhythm of the narrative time jumps, there are some insightful scenes and thought-provoking moments.

Spoiler Alert: this film doesn’t end with a twenty-five-minute alien firefight in London. Much like the recent 45 YEARS (which also starred Rampling), all the drama is in the tiny details. Rather than a round house kick to the face, THE SENSE OF AN ENDING is the equivalent of watching senior Brit actors doing 108 minutes of expert Tai Chi. I enjoyed this film without ever fully connecting to the story and the lives of its characters. (6/10) 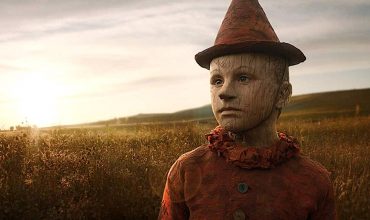