Somewhere in the belly of New Orleans’ Home For Mentally Insane Adolescents lives Mona Lisa Lee (Jong-seo), a catatonic and straitjacket-bound young woman who spends her time staring at padded walls. A psych ward nurse struts down the halls whistling like an infinitely less cool Elle Driver before happening upon our subject’s room and entering, no doubt with the intention of bullying another mentally ill person. But a blood moon looms over the bayou and bitchface picked the wrong night to poke the bear, for something in Mona Lisa is about to change.

It’s fitting that 99-cent Nurse Ratched would be clipping ML’s toenails as the beast within awakens; she has in her hands a weapon of great use in a prison break. “But isn’t Mona Lisa in a straitjacket?” you ask; well yes, but we’re about to find out why that doesn’t matter. As the nurse begins lifting her nails scissors (seemingly without free will), she suddenly plunges them into her thigh repeatedly, before cutting Mona Lisa free and handing over the keys to the door. All that stands between ML and freedom is an on-duty desk clerk and a bag of cheese puffs. She discovers two things on this night; that she can control anyone with her mind and that she LOVES junk food.

Mona Lisa And The Blood Moon sees Amirpour back in fine form after the vibey but lost-in-the-desert The Bad Batch, constructing a much more palatable narrative as writer and directing with verve. Through the alien eyes of her heroine (Mona Lisa had spent 12 years in the institution before her awakening and it’s likely that she’s originally from North Korea) we are introduced to the other characters in this caper.

Befriending a colourfully decorated man named Fuzz (Ed Skrein) who is definitely not a drug dealer, Mona Lisa learns of a kindness that comes from a stranger purchasing her chippies and Jizzy Fizz (Amirpour’s signature soda) when she doesn’t understand the concept of capitalism. She takes on a dislike for cops as the portly Harold (Robinson) pursues her, only to somehow end up shooting himself in the knee after getting too close. She experiences the grey sides of human morality upon delving deeper into the depths of Bonnie Belle (Hudson), an exotic dancer she rescues from a hilariously feminine scrap outside a diner. 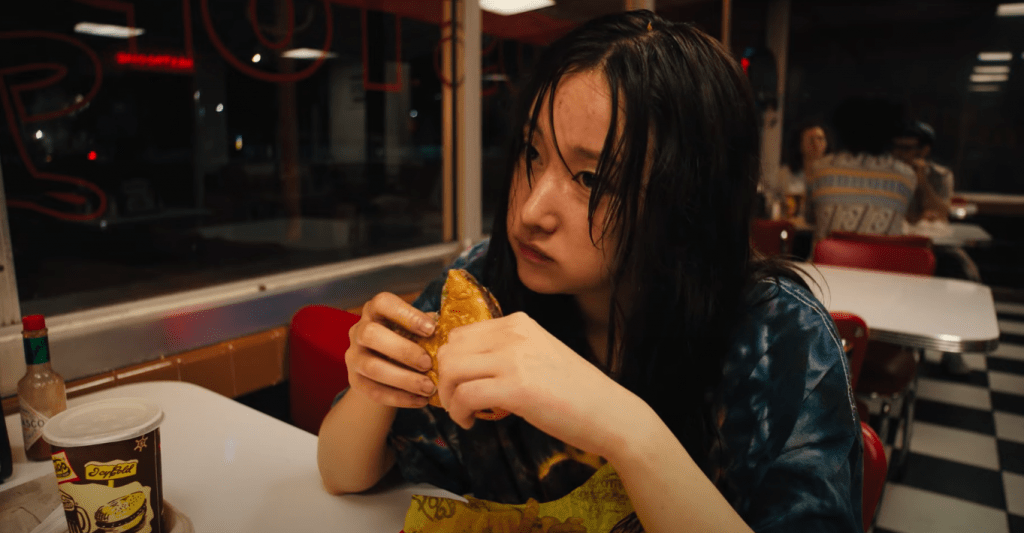 It’s through exposure to Bonnie and her neglected but emotionally mature young son Charlie (Evan Whitten) that Mona Lisa discovers the complexities of modern life. Initially used as an accomplice to help Bonnie rob unsuspecting ATM users, ML lays low in Bonnie’s home and observes the not quite functional mother-son relationship from an outsider’s perspective. While Bonnie will win no parenting awards, it’s clear that she loves her son, but that perhaps the chasing of coin has taken a higher priority in her life. As Mona Lisa bonds with the oft-lonely Charlie, we start to understand why his preferred hobbies are drawing naked ladies and rage dancing to metal.

There’s a delightful coming-of-ageness to the relationship between Mona Lisa and Charlie. Images of John Connor and the Terminator or Elliott and E.T. spring to mind from Charlie’s awe at discovering ML’s powers and his need to protect her from those who would use them for personal gain. The story itself is a cautionary tale of the inevitability of karma and the supernatural themes are weaved in skillfully.

Harold does not heed his fortune cookie warning (“forget what you know”) at the beginning of the film and neither personal injury nor a trip to python-clad medium who tells him to stay the hell away from Mona Lisa are enough to let the message sink in. Bonnie’s attempts to use ML’s powers to hustle extra cash from her stingy clientele are at first triumphant, but she can only outrun justice for so long. One such example is the most comically slow on-foot chase scene of all time, as a cane-aided Harold limps after a stiletto-hindered Bonnie who maintains that she “couldn’t hear him” calling after her. Bonnie does not learn her lesson and karma, unfortunately, catches up to her far more quickly than Harold.

It’s interesting that Mona Lisa’s powers are never fully (or even partly) explained and it adds to the film’s mystique. The lush setting is the biggest hint that she is less Carrie and more Witch Queen of New Orleans, turning victims into living voodoo dolls as she mimes her desired action and watches as they follow through. Whether it is simply the Blood Moon, Harold’s fortuitous cookie, a whistled trigger or a combination of circumstances that lead to her emancipation, there’s no doubt that this town needs Mona Lisa.

Captured beautifully by cinematographer Pawel Pogorzelski (of every Ari Aster film and the impressively taut Nobody), the film turns New Orleans’ French Quarter into a character of its own, rich with texture and illuminated, seedy beauty. Edited by Taylor Levy of the equally fluorescent Bodies Bodies Bodies, there’s a sense of youth and adventure to this film that makes it impossible not to get swept up in.

Performances from the central troupe are generally strong, with Hudson turning in one of the most distinctive of her career, and Jong-seo (whose work as the enigmatic object of everyone’s affections in Lee Chang-dong’s Burning transfers very well to this character) commanding the attention from her powerless audience.

While it doesn’t taste quite as good as A Girl Walks Home Alone At Night, Amirpour’s third film is a hot bowl of gumbo that I’d happily slurp up again.

Mona Lisa And The Blood Moon is in cinemas October 13 but for a more immersive experience, get your body to the Supaluna Screening on Friday 14th. While the moon may be waning gibbous that night, there’s sure to be a themed drink to make up for it. 7.5/10 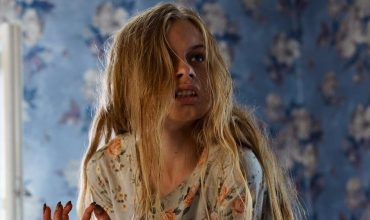