I recall a boozy Saturday night spent watching 2018’s Venom with some fondness. A kind soul had lent us the 4K Blu-ray but the bad word of mouth led to its addition to the pile of great unwatched. It wasn’t until we moved house and the rest of our movie collection was boxed up that we finally gave the alien comic book flick a shot, and perhaps it was the gin’s doing but I found myself pleasantly surprised. It’s not a particularly good film – the villain is weak and a complete waste of Riz Ahmed’s talents, but it quenched my thirst for extra terrestrial body invasions (despite its stingy gore allowance) and Tom Hardy vs Tom Hardy (he voices the eponymous parasite) is a lot of fun. This experience, combined with the news that Andy Serkis would be directing the sequel, led me to feel hopeful that Venom: Let There Be Carnage would deliver on its ‘bigger and better’ promises. I’m not sure it does either, and I’m not sure who’s to blame.

Eddie Brock (Hardy) is slowly crawling the career ladder again after cancelling himself slightly in the last film. He’s lost his fiancée Anne (Michelle Williams) to Dr Dan (Veep’s Reid Scott) but they’re still on good terms and Venom is helping him through the heartbreak. Eddie is invited once more to interview serial killer Cletus ‘the slack-jawed yokel’ Kasady (Woody Harrelson almost reprising his role from Natural Born Killers) as he is on Death Row and refuses to give up the location of his victims’ bodies to anyone else. On his second visit to witness Kasady’s execution, Eddie is provoked to break the “no touching” rule and tries to strangle Kasady, earning a nasty redneck bite to his hand in the process. Eddie/Venom’s blood now pulsing through Kasady’s system results in the most unholy of conceptions – the powerful symbiote Carnage. What could have been a titanic Father vs Son battle ends up an underwhelming and restrained filler movie whose main purpose seems to be assimilation with Disney’s brand of superhero entertainment.

I have with Venom 2 the same gripe that I had with Venom – it should be rated R. I hoped, with the success of Deadpool, that some of the grittier Marvel outings could be allowed their violent delights outside of the bigger universe and their one allocated “fuck”. If any story deserved such a shot then surely it would be this, the Spider-Man spinoff about an arrogant journo being invaded by an ectoplasmic, liquid beast with desires at odds with that of his host. It’s a recipe for an enormous amount of gory fun and I lament the lost version that perhaps exists in the multiverse. But there are at least some residual laughs to cling to in Carnage, even if they are just more of the same.

Venom’s dietary requirements are again the source of much of the comedy. He feeds on phenethylamine – a compound that, in the Marvel comics, is found only in brains and chocolate. Eddie tries his darndest to keep his strange bedfellow sated by means other than plucking humans off the street to mange on, so he invests in some house chickens for Venom to enjoy. And enjoy he does, but not digestively – “Sonny and Cher are best friends” according to his advanced, alien deductive skills and are therefore off the menu. It’s clear that tensions are set to rise between the two roomies if Venom’s veganism goes on for much longer, but their spats are the most entertaining part of the film.

The only real strength of Let There Be Carnage is the central relationship between Eddie and Venom. Serkis and Hardy have described this as a love story and cited classic films like The Odd Couple and The Seven Year Itch as inspiration for the dynamic. I am a fan of the intentional parallels to other love stories of cinema, particularly the use of the Ella Fitzgerald/Louis Armstrong ditty from When Harry Met Sally and its throaty rendition by Venom while making breakfast (and a giant mess) for Eddie after his heartbreak. I’m not ashamed to say that I laughed out loud during this sequence (especially at the well-foleyed ketchup splat) and could happily have just watched two hours of that. The comedy works because the method is tried and tested, but other aspects of the film are not as strong.

There are a frustrating number of missed opportunities in this film, both for comedy that expands on the now-developed schtick and for plot points that would’ve seemed far more logical than what actually happens. Carnage is conceived by the mixed blood of Eddie and Venom and this setup is ripe for deadbeat Dad jokes or perhaps a throwaway line about co-parenting, but by the time the lads finally meet the villain face to face it’s at the end of the movie and there’s no time left. The pacing of the rivalry is not what I expected, either. Imagine if, instead of Godzilla and Kong facing off in multiple rounds where it could go either way, Kong just got Godzilla’s girlfriend to yell at him until he couldn’t take it anymore….you’d be a bit disappointed wouldn’t you?

The opening scene of the film attempts to set up a love story for the ages between Kasady and a sonically gifted girl named Frances Barrison (later played by Naomie Harris.) The two meet again as adults through Carnage’s capacity for prison break and because of the time that has elapsed, their Bonnie and Clyde style escapades seem very rushed. There is a moment towards the end where Frances looks as if she is going to realise that her boyfriend’s new tenant is perhaps a bit of a dealbreaker and turn to the ‘good’ side, but something happens instead to prevent her making the decision. It would’ve been the only chance Naomie Harris had in this film to show some personality other than screaming her sonic death rattle – a character trait that is both predictable in its purpose and also hard to believe as a foil for such advanced beings. A seed planted with Stephen Graham’s detective character is seemingly abandoned for some other purpose that we’ll no doubt discover in the next Venom, but the fact that he is potentially immune to this scream and that this advantage is never put to the test is as baffling as it is wasteful.

Perhaps part of the problem lies in my expectations, since I had absolutely none for the first film and have seen other, better examples of onscreen symbiosis in the lead up to its sequel. 2020’s brutal Russian Sci-Fi horror Sputnik, about a parasitic extra terrestrial that lives inside its host’s esophagus until it’s ready to come out and feed upon the cortisol emitted from its terrified victims, did much more interesting things for this very niche subject. Most importantly though, it had the bloody terror required for such an invasive concept – a result many films have been trying to achieve since that tiny baby xenomorph burst out of John Hurt’s chest all those years ago.

It’s also possible that, ironically, Andy Serkis and the content are just not a good match. Appropriately-named Ruben Fleischer directed the first Venom and had previously directed Zombieland, some episodes of the cannibal comedy series Santa Clarita Diet and heist comedy 30 Minutes or Less. Despite the latter being in horribly poor taste due to its true crime source material, this experience meant that Fleischer was well-versed in combining horror elements and comedy with some success. Andy Serkis, his revolutionary contributions to motion capture notwithstanding, does not have the same knack.

The only features to Serkis’ name prior to Let There Be Carnage were biopic Breathe and Mowgli: Legend of the Jungle (the Netflix one, not the Disney rehash.) My assumption is that Serkis was brought in by Hardy because of his expertise in mo-cap (there is a story that Hardy originally used Serkis’ studio in the early days for a project that would turn out to be Venom) and in creating a compelling coexistence between conflicting personalities in one host, à la Sméagol and his nasty little flipside, Gollum. But there’s more gore in The Lord of the Rings than in Carnage and I find that quite telling.

I will acknowledge that I have not read the comics and have no idea if these issues are present within them (doubtful) but I just think that a character called Carnage who’s being hosted by a serial killer should probably have been given more of a chance to inflict some damage. If anything, at least this film has incited in me a desire to dig deeper into what Marvel originally did with these characters – if only I hadn’t sold my entire unread graphic novel collection to that nerd on Marketplace. In true franchise form there is a post-credits scene that tries to tie all this in with whatever Disney is trying to do to keep their gorged audience sated now that the Big Boy MCU is over. I understand that Sony signed a deal with the Devil to allow their Spider-Man films on His platform and this was always an inevitability, but is it too much to ask that a fleshy, symbiotic Creature Feature be left to wreak the havoc it deserves in its own, more adult space? 5/10.

Venom: Let There Be Carnage takes over our screens November 25.

Laura Blundell
Laura hopes to one day have a video store within her house, to fill the Blockbuster-sized hole that the eradication of physical media left behind.
5 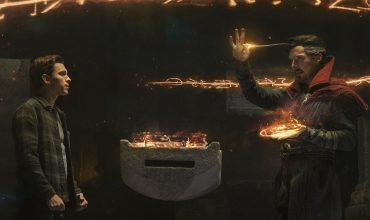